The meeting was with Professor Marco Antonio Carvalho Teixeira, who works at Fundação Getulio Vargas, one of Brazil’s top business schools. He told us that PB in Porto Alegre, the founder of PB, has effectively been discontinued. This issue allegedly because (1) city hall had lost control; (2) PB wasn’t achieving anything; (3) tax revenue had fallen, so here were not enough funds to fulfil social demands. He has published a paper on this aspect of ‘strained democracy’.

However, in Recife, PB has not lost so much popularity: the is more participation in decisions, and the average project cycle is 2 years, leading to less loss of confidence. In general there is tension between participatory and representative democracy.

I think there is a lesson for Scotland here, namely If we don’t get PB right first time, people will lose confidence in it. This means we need effective processes so that people know they have made the choices. It also means that what is promised must be delivered.

Also today, Hazel gave this presentation about our work to the Napier research day. Meanwhile Wegene had a brainwave about refining our research questions.

I spent some of this morning devising interview and focus group questions that could help answer Wegene’s new version of the research questions.

We had been invited to give a presentation about Scottish PB to Orlando, the co-ordinator of São Paulo’s 32 participative councils. This took longer than planned: partly because I tried to speak slowly and clearly; partly because after every couple of sentences, I stopped for Hugo to translate what I had said, then translate back Orlando’s questions and comments. He is clearly interested in what Scotland is trying to do.

Here is my presentation, and here are my speaking notes. Bear in mind that the description of PB in Scotland is mostly based on my experiences.

As we entered the Prefeitura, we noticed there were a lot more police on duty. We were told that unrest over recent rises in public transport prices was expected. After dinner at a nearby eaterie, we couldn’t go the nearby way into Anhangabau metro station (see metro map) but had to walk what felt like a couple of miles to a much further entrance.

I had a very broken night, mainly due to the large amount of feijões I ate yesterday. Renato picked us up around 7am, so we could meet Professor Wagner Romão, who has worked with Brian Wampler. He told us that he has conducted a census of PB from 1989 to 2016. Up to 2003/2004, PB was increasing but since then it has ceased being so important. This may be due to other forms of participation gaining currency. 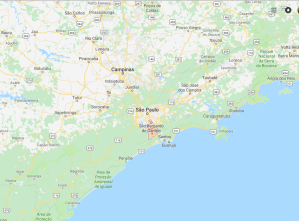 In his view, participation is a function of the structures set up by the relevant city mayor. For example, in São Bernardo do Campo (a city in the metropolitan area of São Paulo), they mayor recently rearranged the budget council so that it contains 20 civil servants and 20 representatives of civil society. (The latter are elected as part of PB processes pertaining to regional assemblies. NB a region in this case is a part of a city.) It should be noted that of the 20 representatives, 16 are members of the same political party as they mayor. (The other 4 are members of another party.) So even where PB is relatively thriving, it’s very political.

After lunch at a cafe in the University (for some reason, the cafe is called Sweden), we worked on as the weather outside deteriorated. As we were about to go into a meeting in the afternoon, a clap of thunder sounded like a shot and I almost jumped out of my skin.

This meeting was with Professor Ana Fani Alessandri Carlos. She is a very enthusiastic geographer, focusing on the concept of space, and a member of the GESP research centre. She and her colleagues have used a framework of ‘the city as a business’ to explain human crises. For example, the poor don’t contribute to businesses’ (e.g. housing providers, food sellers) profits, because they can’t pay the high prices demanded. So they are effectively forced to relocate far from the city. Wherever they end up, there are no well-paid jobs so they can’t get back to where they came from and they lose social networks and hence their identity.

I mentioned that Edinburgh tries to ensure that all new building schemes are supposed to have some social housing. Apparently there is no law like this in Brazil.

Ana suggested the current decline in PB is for two reasons:

Ana also stated that food-poverty has mostly been cured in Brazil thanks to former President Lula‘s Zero hungry.

After this meeting, Renato took Wegene and me to a restaurant. His wife, Priscilla, joined us. She’s from an area that apparently produces the best coffee in Brazil. Unfortunately I won’t be able to buy any directly from there because it’s all bought by wholesalers.

Renato and Wegene leaving the hotel

I slept until 8am, looked outside the hotel, then slept until 11:30. I worked on the interview and focus group questions until about 2pm, at which time Renato came to take Wegene to the airport. Since then I’ve watched a film, written up a few more of my notes from previous meetings and written this blog.

My plans for tomorrow include laundry, more writing up and question-devising, some marking work and maybe taking a wander downtown.