Today was my tourist-without-a-clue day.

Hugo had recommended that I have a look at Ibirapuera park, which he described as being ‘something similar to the Meadows on a large scale’. So, after getting to sleep about 5am (too much Diet Coke with my food last night) and waking about 11am, I slobbed around reading the Grauniad online and eventually set off about 2pm.

Hiring an Itau bike was slightly faffsome. Worse was having forgotten my phone holder, so there were lots of stops for navigation. Here’s today’s route: 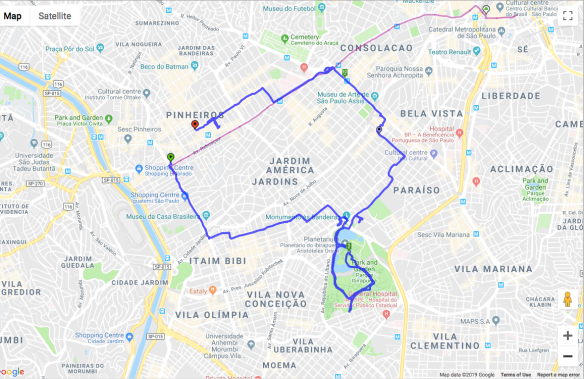 Most of the journey to the park was on São Paulo’s good cycle-paths. There were a few stops for wildlife photography. Hence the title of this post.

When I got to the roundabout near the park (Praça Armando de Sales Oliveira) I got very confused about how to actually get into it. The route passed the Monument to the Bandeiras. The inscription reads (if I’ve translated correctly) Glory to the heroes who have traced our destiny in the geography of the free world. Without them Brazil would not be as  great as it is.

I circled the park a couple of times, looking to see if anyone was swimming in the lakes. No-one was, so I didn’t try it. Outside the park, a samba band was practicing. Also near the park is São Paulo state’s Legislative Assembly. There are a lot of statues in its grounds. There also a large military base (Quartel General do Exército – Comando da 2ª Região Militar) just across the road.

By now it was late afternoon, so I decided to head to Avenida Paulista, a street Hugo had also recommended visiting. En route I found another limitation of the Itau bikes: their lowest gear isn’t low enough for hill-starts on São Paulo’s hills. (Of course it may just be that I am pathetically weak.)

As soon as I arrived on Avenida Paulista, I was in the audience for a very good street magician. Other spectators were videoing his performance but I thought this was a bit tacky. I want to enjoy performances, not hide behind my cellphone all the time.

By now it was early evening and I was hungry so I cycled to Hareburger. This was the fastest part of the journey because it was mostly downhill.

After I’d eaten, it was starting to spit with rain and get dark, and I was tired. Also jPhone’s batter was very low. (I’d bought a USB battery but not a cable – BAH!) so I cycled back to my hotel. Just to make a few people jealous, at 8pm this evening, the temperature here was 26°C. (The highest I saw was 36°C. However, that’s nothing compare to Australia just now.)

It’s now nearly 11pm. Will I try to sleep or will I put on such glad rags as I have with me and try to get into a club? Answer in the next post. Nighty-night!