It appears that it’s been raining spiders in Brazil!

After I wrote my last piece, I realised it was quite late. I searched Google Maps for somewhere to eat, and hit on Hareburger. All together now:

I phoned my much better half. She had some ideas about my draft ‘lessons for Scottish PB‘. Her main point was about the first item: If we don’t get PB right first time, people will lose confidence in it. She pointed out that nothing goes right first time, so what does right mean in this context? My current answer is good enough. For me, that means

I then walked to Hareburger. It was rather ironic that the first song jPhone played was 4st 7lb. Hareburger was supposedly 19 minutes walk from my hotel but it took me about 30 minutes to get there, mainly because I’m a little nervous about crossing roads. On the way I passed the inevitable Subway, another vegan eatery, and somewhere definitely not vegan.

This was my dinner at Hareburger: hare rock shutney mango’s fly, batata quanta rustica and suco de terra (hibiscus tea, beet, carrot, lemon and strawberry). The only problem with it was it was not enough for this gutbucket! (It was relatively cheap: about R$38 = £8.) 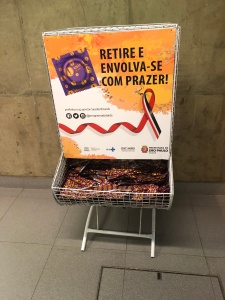 On the way to Hareburger, I’d passed a metro station which isn’t on the map I’d found online. (Blame the seeker, not the internet! Here’s the official map.) I realised that this station (Fradique Coutinho) was on the same line as Faria Lima, so I decided to save my feet. The city council had a stand offering free condoms.

At Faria Lima station, I walked on to Largo da Batata (Potato Square) to see if there were any interesting smells. There weren’t so I’ve come back to the hotel for a last coffee and to write this.