Workshop 1 – What are the issues that matter most to you as a community councillor?

This was the start of the fun parts for me. My table had delegates from Argyll & Bute, Fife, West Dunbartonshire, Stirling, and Glasgow. (One asked me not to report her CC, so I’ve omitted CC, delegates’ and the facilitator’s names.) Here’s the issues we came up with. 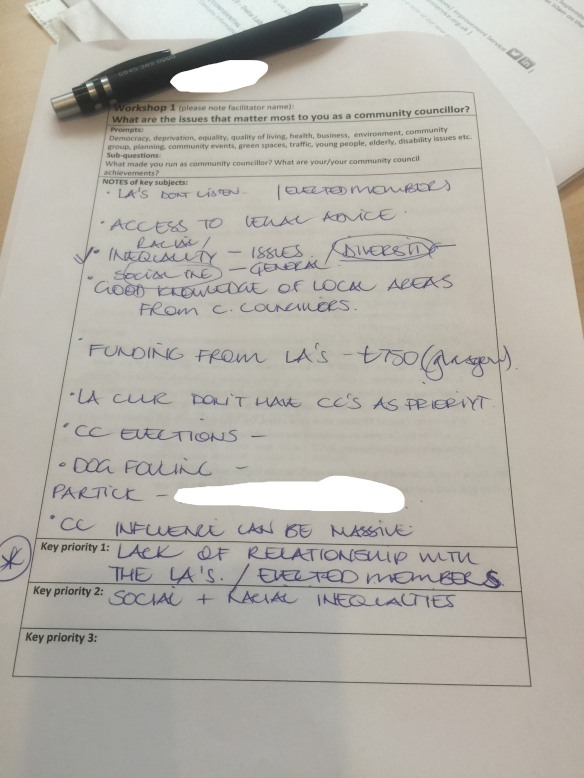 The diversity issue is quite important to me. The CC members I know in Edinburgh are all white and most are of UK origin/ethnicity. (Two highly energetic CC members I know are dutch and german.) In my admittedly limited experience, most CC members are middle-class. But many citizens are not white, UK/European and middle class. Why are they not represented? What are CCs doing to reach out to other communities?

Other delegates talked about the intractability of LAs, who (in these delegates’ views) often act as barriers to CCs’ activities. I’ve encountered some stupid behaviour by my LA, and some very spurious, waffly excuses when I pointed this out. But I wonder whether some CCs are as obdurate as they accuse their LAs of being. Have we got into a situation where CCs and LAs are so used to blaming each other that nothing actually happens? (This is just a suspicion, not an accusation.) However, there is nothing in the primary legislation preventing CCs from doing any legal thing, as far as I can see. Here’s the relevant parts of the 1973 Local Government (Scotland) Act.

In addition to any other purpose which a community council may pursue, the general purpose of a community council shall be to ascertain, co-ordinate and express to the local authorities for its area, and to public authorities, the views of the community which it represents, in relation to matters for which those authorities are responsible, and to take such action in the interests of that community as appears to it to be expedient and practicable.

As far as I can see, the 1994 and 2003 Acts didn’t change this at all, so I think CCs can JFDI, so long as they have the resources and abilities. (That’s another question, one which has not yet been properly answered.)

This is also where I question some delegates’ statements that CCs can’t own things. The primary legislation does not state this as far as I can see. It may be in secondary legislation or LA schemes for Community Councils, but I haven’t seen it. LAs may have threatened to cut CC grants if they have surplus funds but this was not my experience as treasurer of St Andrews CC in 2004-5. And I see no legal barrier preventing CCs from raising their own funds, so long as the purposes are community-centred and the funds are disbursed appropriately. Of course CCs may not have enough members to undertake these activities.

Mr McAteer also mentioned that public bodies now have a legal duty to work together, not just concentrating on their individual missions, towards a holistic common good. As I recall, one mechanism will be local outcome improvement plans. There is/will be a legal obligation for these, similar to the Single Outcome Agreements which link LAs, emergency services, the NHS and other bodies in Community Planning Partnerships.

1 thought on “Fairer Scotland event for Community Councils 3: which issues matter the most”