On Wednesday I gave a presentation which was coherent and informative, and yet made up partly while I was listening to someone else’s but mostly in response to questions from the audience as I was speaking. Whenever I’ve given presentations before, I’ve mumbled incoherently as I drowned in my own nervousness. So throwing me in the deep end is perhaps the way to get good presentations out of me. (Peter, don’t you dare!)

The occasion was a visit by politics students from Tarleton State University in Texas, led by Dr Eric V Morrow and Dr Matthew Hallgarth. The party had been touring Scotland to get to see how political issues are handled this side of the Atlantic – this tour was organised by Kailee Sanchez of CISabroad. Their interests included community engagement and how environmental issues trickle through the various levels of government in the UK, so they had invited Savio D’Souza of Giffnock Community Council to speak to them. He and Giffnock CC have done a lot about these issues. Savio in turn had turn invited me, on the strength of the work I’ve done with Peter Cruickshank on digital engagement by Community Councils.

I arrived as Dr Morrow was briefing the students about an assignment. It sounded pretty fearsome to me because the word limit and topics would require deep analysis in very concise writing. Savio then spoke about his personal history of activism around environmental and community issues in London and in Giffnock (wikipedia). As he spoke, he covered several of the topics I’d thought to speak about, thus requiring me to think on my feet even more about what to say. As it turned out, this was a good thing. I’m also pleased that I managed to handle being called by the passport authority about a lost passport in the middle of speaking. (I apologise to Eric, Matthew and the students for the gaps that caused.)

The following is what I talked about, with a few more details about how I’ve became a social informatics researcher.

I started by talking a little about my own environmental activism while studying for my Chemistry BSc and PhD. This brought back fond memories of scaling buildings in St Andrews to place banners. I wouldn’t do this now – there are much better ways of pushing my agendas. It also brought back memories of collecting old newspaper for recycling at the 5th Worcester Sea Scout group. That was long before environmentalism hit my consciousness – it was about raising funds for the group.

After my PhD I worked in educational publishing. The environmental issue that concerned me most was that most of our books were printed in Hong Kong and China, thus causing lots of passenger miles for the ink, paper and finished books. I admit that I was probably most narked because the two- to three-month lead times ate badly into the time we had to lay out, illustrate and proofread. Also during this time, I worked with a fine bunch of people on the St Andrews Fairtrade Town campaign. I left educational publishing for personal reasons – I am still proud of producing books that I believe contributed to a lot of education in Scotland and I’m fond of my former colleagues.

I then started a part-time MSc in Information Systems Development at Edinburgh Napier University. In the second term I was supposed to choose between a programming module and a module called web-enabled business. I didn’t want to drop programming that early, but I was curious about how capitalism and the internet mixed so I took both modules. Peter Cruickshank taught the web-enabled business – it was challenging and interesting. (Despite this, it was the only module in which I achieved a below-distinction grade.) I also had a look at Peter’s research interests, and saw he did interesting things around the internet and democracy.

I had nothing academic timetabled for the summer of 2012, and I had considered designing and building a bike-trailer. However, partly because I wanted practice for my forthcoming MSc dissertation but mostly because I wanted to do something academic, I asked Peter if he would supervise me doing a research project. Fortunately he agreed, and thanks to him the 2012 survey of community council internet presences was born. 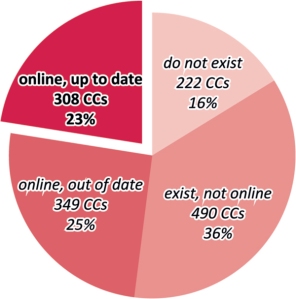 I then won some research funds from Napier to resurvey Community Council internet use in 2014, naively assuming that things would be a little better. At this point, I asked the visitors to predict the 2014 results. I think Matthew suggested they would be poorer. However, they were almost identical: 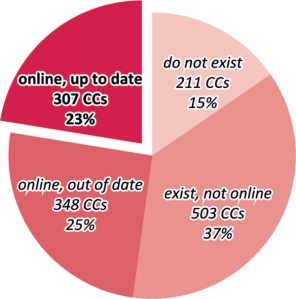 Naturally, we tried to come up explanations. As I recall, Peter suggested investigating whether the CCs that were online in 2014 had also been online in 2012. We came up with this picture of the churn between the classes of CCs: 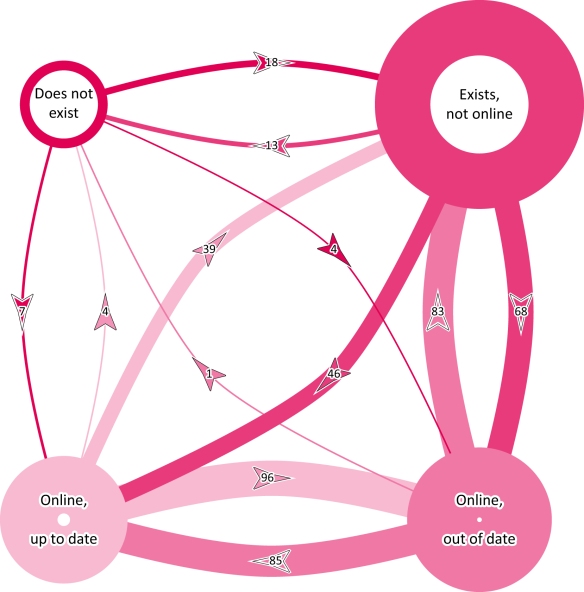 The rings’ outer diameters represent the numbers in each status in 2014. The rings inner diameters represent ‘churn’, i.e. the sums of the numbers that entered and left this status since 2012. The biggest change was that 68 CCs who had merely existed in 2012 had out-of-date internet presences by 2014. This means they must have started their internet use after the 2012 survey but effectively abandoned them by early 2014. We are currently formulating projects to understand why this happens and what might be done to support CCs’ sustained internet use.

After this, we won seed-project funding to investigate whether the Communities of Practice model could be used to to investigate learning around digital engagement within CCs, and whether action-research methods could improve matters in a few neighbouring CCs in Edinburgh.

My potted guide to local government in Scotland

I was then asked to explain how CCs fit into Scotland’s government structures. My explanation was

You can see the actual boundaries on this map. I suggested that the lack of coterminosity is possibly to prevent anyone doing this: 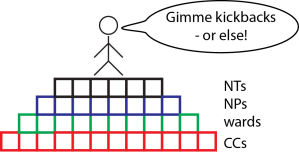 However, it might just be the British way. (I know that doesn’t explain anything in any teleological, evolutionary, structuralist or functional manner, or any other manner for that matter.) The same thing occurs in the Scottish judicial system, where sheriffdoms and other judicial boundaries don’t match each other, giving rise to all sorts of logistical fun.

LAs are also fairly free to organise things differently. For example, LA websites can differ remarkably, as I found out in my first web-enabled business coursework. And this is in spite of the existence of the Scottish Navigation List which should ensure consistent navigation to similar information.

The power of community councils!

I was then asked about Community Councils’ powers. Er, formally, they don’t have any. They have the right to be consulted on licensing and spatial planning matters, and they are bound to ‘ascertain, co-ordinate and express to the local authorities for [their] areas, and to public authorities, the views of the community which [they] represent’. But LAs are not required to implement CCs’ inputs in such matters.

In community planning partnerships, LA-level bodies that help ‘public agencies to work together with the community to plan and deliver better services which make a real difference to people’s lives’, CCs are only indirectly involved. I also examined the make-up of all the CPP boards in 2014. At that point, CCs were directly represented on only half of these boards. CCs do have ‘soft power’ – that is all CCs have LA Councillors as ex-officio members. In Edinburgh, CCs have been talked at about the joining up of health and social services. (I was at the event where Edinburgh Council promoted this policy to CCs. I don’t remember much, if any, consultation being part of that event. However, my memory isn’t that trustworthy. For what it’s worth, I think the idea of linking health and social care is very sane. I can’t comment on Edinburgh’s implementation, though.) So CCs have – to some extent – the ears of people who can and do decide things.

This is in stark contrast to the majority of European Countries where hyperlocal governments provide services and levy taxes to support this. For example,

I was also asked how Scotland’s local government systems came about. Fuller details are in my MSc dissertation, but the basic answer is that before 1975, there was a bugger’s muddle of counties, counties of cities, large burghs, small burghs and districts, stemming from an earlier reorganisation in 1929 (PDF of legislation). It was suggested that this was a direct descendent of a lot of Scotland being nobles’ shooting estates. I’m pretty sure that a lot of English nobility was ‘planted’ in Scotland after the Jacobite rebellions but also that a lot happened in the ensuing 270 years.

Whatever the cause(s) of over 200 bodies trying to represent and act for (at a guess) 4 million people, in 1973 a system of 9 regions and 3 island areas, containing 53 districts was established. Regions became responsible for ‘wide-area’ services (e.g. policing, fire services, consumer protection, education and transport) while districts were to provide local services such as local planning, housing, libraries and licensing. Community Councils were also established by the same legislation. (I don’t recall this – I was only 9 years old at the time and lived in the middle of England.)

In 1996, the structure was flattened to the 32 Local Authorities we know and (maybe) love today. Community Councils were completely unchanged by the legislation. (I do vaguely remember this, but I was going through a housing-related personal crisis at the time.) It’s interesting that central government in the UK has the fiat to order wholesale changes to local government. I can’t imagine Austrian Gemienden simply acquiescing to changes imposed by Vienna.

I think that’s all I fitted into about 20 minutes. I would also like to have talked about

Finally, thanks to Eric, Matthew, Kailee and Savio for the opportunity to talk about some of the things that interest me personally and professionally. It was a revelation that I can present coherently with so little preparation. Perhaps I’ve over-prepared previously. And thanks again for a great lunch and what I learnt from Eric and Matthew over it. I hope that if Eric and Matthew bring similar group of students in subsequent years that Napier’s Centre for Social Informatics will be able to exhibit more of what we do.